Hello and happy Monday! Here is one more stash-busting-project based card. I hope you are not getting tired of these? I love making them and discovering, how quite old produkt works together with newer ones. And the funny thing is, they REALLY do! Even the colours match! How amazing is that!??

For this card I again used the Pink Paislee Truly Grateful tiny 2×2 inch paper pads to create the „quilt-style“ background. The size is perfect for a card background!

And for decor I used really quite old embellishments (chipboard flowers etc.). These are mostly by Basic Grey (I think) and Cosmo Cricket and go quite a long time back in time. At least 10 years if not longer…

For additional decor I added hand drawn faux stitching and a stamped sentiment from my Stampin´Up! stamp collection. That´s the whole magic behind this card. And it´s still quite flat, so it should be not problem to mail it to someone. 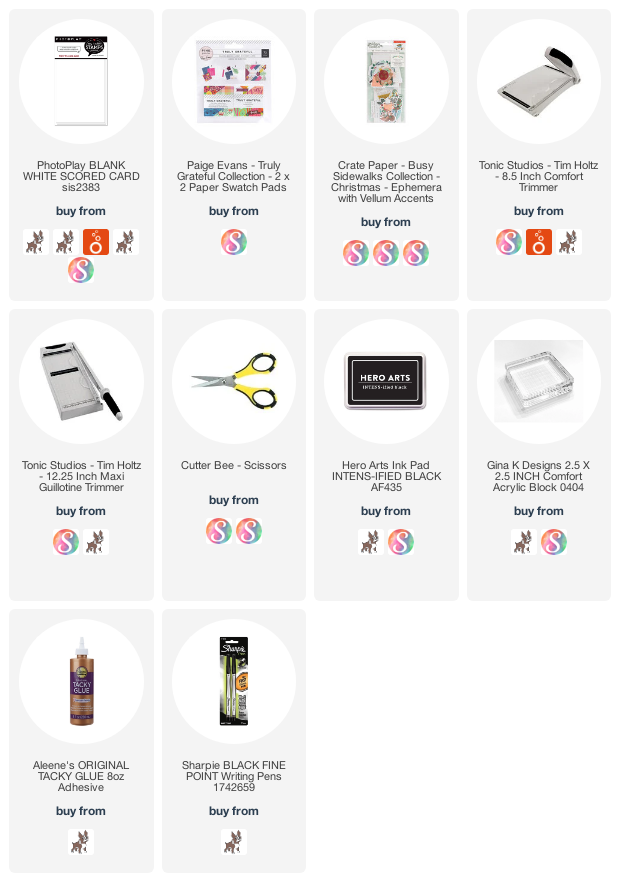 Hello everyone, I am again up over at the Elizabeth Craft Designs blog today with another guest design team card project share. This card idea originated from my wish to have a die that I could create a chevron type background with – which I didn´t own. But then I figured, I actually could use my existing basic dies to create a chevron pattern as a card background. And while I die cut the „chevrons“, I had plenty of pieces left, from which I still could create two fun cards from. So, one basic idea led to a set of cards and I´m quite happy with my DIY chevron background too!

Here is how I did this card:

Step 1: I first die cut „frames“ with the Stitched Rectangles die set by using the largest and the third largest die from the set. This way I had a bigger frame than if I had used the next to largest with the biggest size. I picked yummy, summery pastel cardstock for die cutting. I also kept the stitched rectangle pieces for later. You will see how I used them on the two cards to follow.

Step 2: After die cutting the frames I then took a card base and arranged the corners onto it in such manner, that they formed a „chevron“ and marked the edges with a pencil. This way it was easier to know where to cut later. After that I just adhered the piece onto the card base with Clear Double Sided Adhesive Tape. Out of each frame I got two bigger parts for the chevron pattern and I also saved the smaller ones for the lower and the higher corners. So for this size of a card you only need 4 frames in total.

Step 3: After adhering all the corners onto the card base I took the Planner Essentials 21 „Note Pieces“ set and die cut a focal point for the card from black cardstock.

Step 4: I then added a stamped and embossed sentiment using the Planner Essentials „Remember“ stamp set with neon green embossing powder. After that I just adhered the sentiment with 3D foam onto the card to create more texture and interest. For finishing touches I added a few craft drops for decor. The residue pieces then let to the second card:

For this one I did the following steps with the residue papers I had left over from my first card:

Step 1 to 3: I placed the stitched rectangle cardstock pieces onto my die cutting machine and places a stitched oval die onto the middle of them and die cut 4 pieces to create the oval background piece for the next card. After that I took a leftover strip of the light blue cardstock and attached Clear Double Sided Adhesive Sheet onto it and die cut two „Budding Florals“ for the card. I then adhered the flowers on place, applied some liquid adhesive and loose golden glitter onto the upper area of the buds and let that dry. After the adhesive was dry, I just tabbed the residue glitter off. For the sentiment I used the General Sentiments stamp set with white embossing powder and a piece of black cardstock that was die cut with the Fitted Fishtail dies. Very easy, but still very colorful thanks to the multi-colored background piece. This then led to my last card project:

For this card I used the final stitched rectangle pieces, as shown in the steps here:

Step 1 to 3: I arranged the leftover pieces from the previous card onto the card base and cut them into size so that they filled the whole background. Then I die cut a focal piece from white cardstock using the Stitched Circles die cut die. I stamped and embossed a sentiment (using General Sentiments) and florals (using the Spring Fling stamp set) and golden as well as light green and pink embossing powders. After embossing I inked the circle light yellow with Distress Ink. Next I die cut a piece of golden glitter carstock with the Scalloped stitched circle die to place under the sentiment piece and finished the focal piece off with some Fitted Fishtail dies.

So one idea led to a set of three fun cards and I basically worked with the same paper pieces from start to finish. Here are some close-ups of the finished cards:

I hope I could inspire you to take a second look at your basic dies to use them in a little different way! I´d love to see what kind of ideas you come up with. Wishing you a fabulous July and see you again next month with another card idea!

Hello and happy Tuesday! Today I´m again stopping by with another stash busting type of card. For this one I´ve used residue papers from my design team time at The Wild Hare Kits. I adore this Heidi Swapp camera paper so much!

Basically I´ve just added layers of paper and wripped one part of the camera paper to add texture.

And for finishing touches I´ve just added a few embellishment in a cluster into the middle of the card. Also if you look very closely, there are tiny droplets of Nuvo Drops in the centers of the flowers. Just a tinyl detail to add some glitter and interest to the otherwise very simple card.

I love how these papers work together so well and sometimes it´s just good to layer paper on top of each other and do no techniques, heavy layering or mixed media. 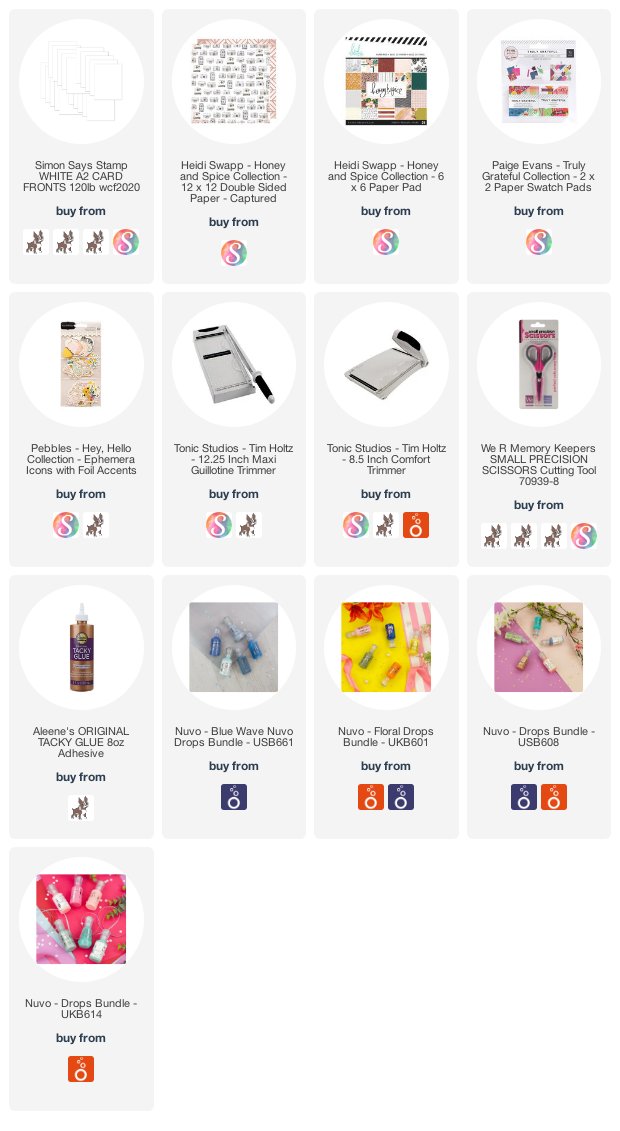 Hello and happy Monday! Today I´m again stopping by to share another clean and simple card with you! One of my all time favorite colours is yellow. I´ve loved yellow since I was little. It is a colour that immediately lifts my mood!

For this card I used the STAMPlorations „Rag Rug“ stencil from my stencil line there with yellow Distress Ink. The stamp and die set is by Pinkfresh Studio/Altenew and I love using this kinds of stamps to „color“ flowers. This way I don´t have to worry about adding the shading to the right spots, because it´s always right.

Hello and happy sunny Saturday! First it was too cold and then it´s just way too warm. What a crazy weather we have nowadays!! There even was a tornado in the Czech Republic this week (too close to where we live in my opinion)! Very scary! Also I am staying inside still, as my pollen allergy is really bad this year… and since I´m „hiding inside“ I have more than enough time in my hands to do some crafting! So I have been seriously stash busting recently!

I´ve used up some residues from my design team kits, while I was a dt member at The Wild Hare Kits. These 2×2 inch square bits by Paige Evans for Pink Paislee are just perfect for creating card backgrounds. You get a really cool „quilt background“ with them and then just need to add just a few pieces of ephemera and such for decor and the card is done!

I also used up some Shimelle glitter alpha stickers for this card and to make sure they stay on place I used me sewing machine instead of glue! The little doily was gifted to me by my lovely friend Lizzy and the ephemera is from my time at The Wild Hare Kits. Some faux stitching with a black pen for finishing touches and the card is ready to be sent on it´s way.

I usually do my backgrounds using different mixed media techniques, but during the years of my crafting hobby I´ve managed to gather quite a selection on patterned papers, embellishments and such, so it´s about time I use those products up. It is very possible that I will not be able to finish this goal in my lifetime (yes, there is so much stuff!), but I am at least trying!!

What about you? Are you a hoarder? Take my advice: stop hoarding! Just buy what you need and use it up! First then buy more! Believe me, I know what I am talking about! 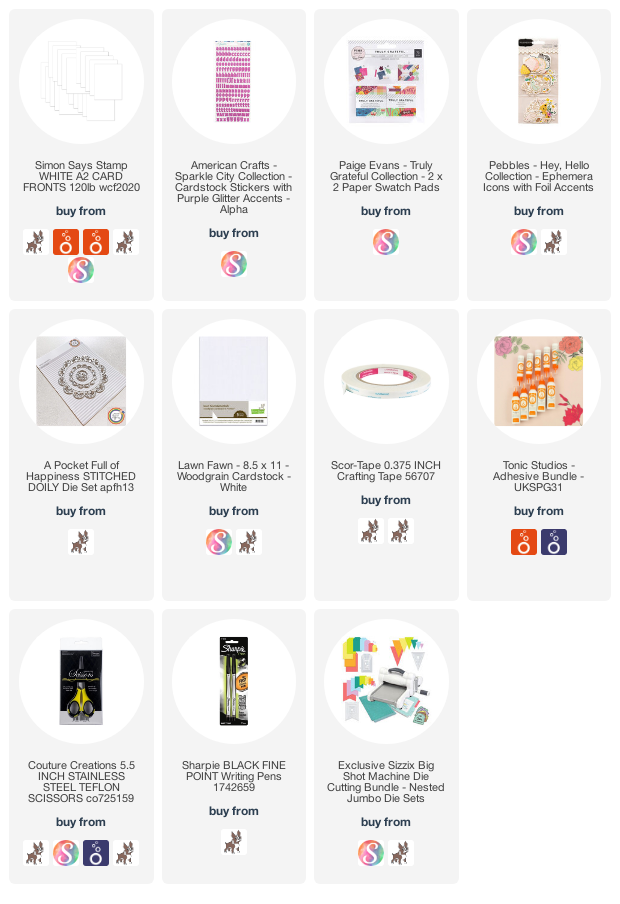