So these cards started off as a challenge under friends. Some Skyping was involved, as well as lots of good laughs and lovely chatting! And a card recipe of course! We were to use (I hope I get this right): black and/or white, plus one extra color (and/or shades of that color), enamel dots, shapes, stamp. Here is what I did:

Now I still have several Studio Calico kits from previous years which urgently need to get scrapped/used, so I dug through them and found all these lovely bits and pieces. Only the felt bow is by Bella Blvd and quite new, everything else is from kits I used to order „back then“. Oh, and the black paper is by SODALICIUOS. 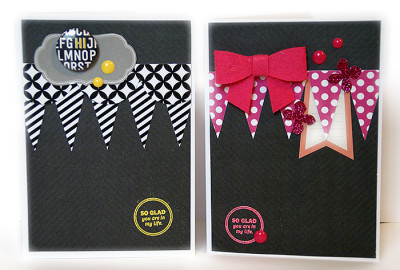 The 3 cards with pink, yellow and blue color I did according to the recipe (we were only to do one, but I could not stop there). And the last one is mainly in black and white – this one I kept for later, all the others are in the mail, or were delivered personally to my scrappy friends :-). 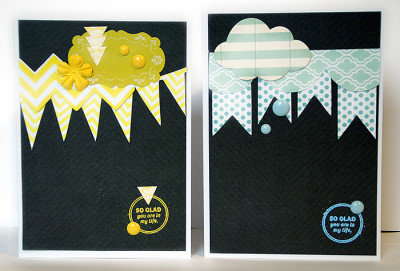 And what did I notice, I quite enjoyed creating after a recipe for a change. Someone else giving orders and making plans and me just following those. So much fun! And another surprise – I really, really like my clean & simple style cards!!! Quite much actually. I hope that the recipients will like them too.

The best part? The chatting and giggling with like minded people! Always the best bit!! Have missed that recently. It has been too long since the last time. And again I have to say that this hobby would be only half as fun without all the friends I´ve gotten through it! 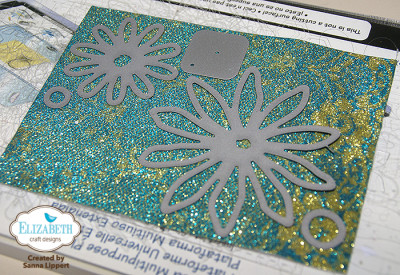 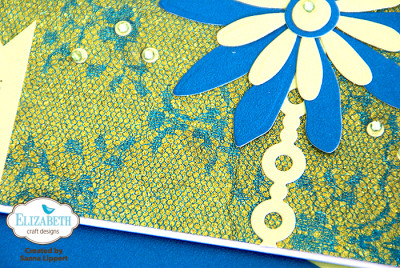 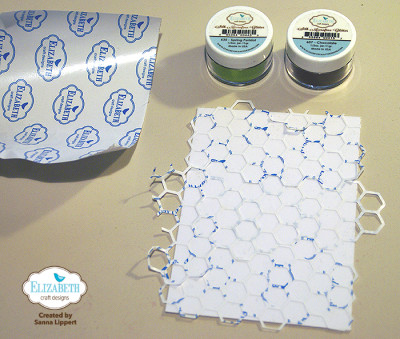 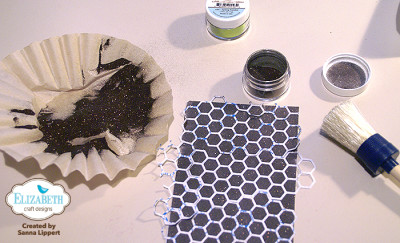 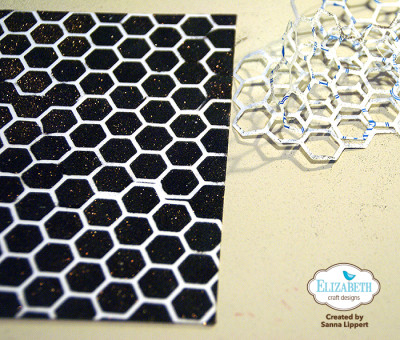 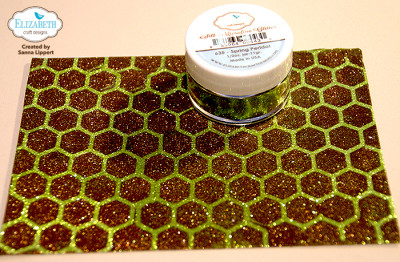 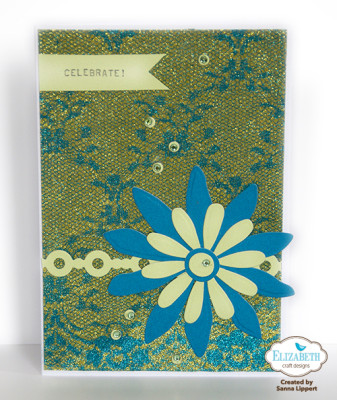 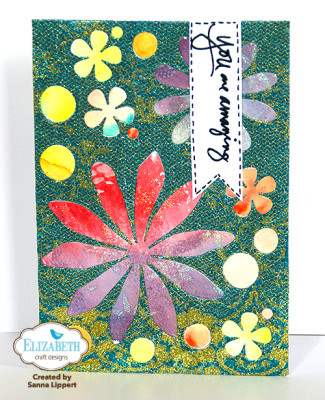 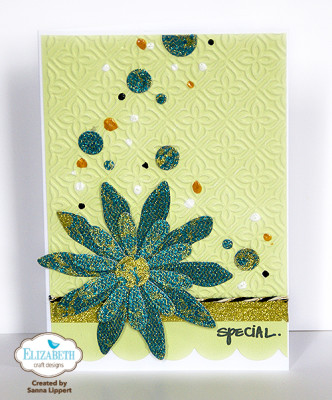 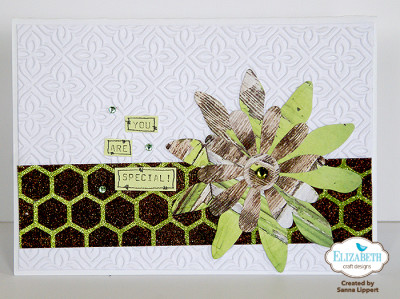 Time for one more butterfly inspired card! As you might remember, this months challenge at The Mixed Media Card Challenge blog is all about butterflies (and gold).  I hope you have found time to play along with us this month – and if you haven´t there actually still is a little time to join in.. 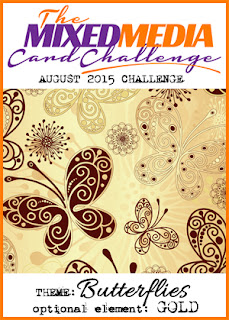 This is my second card based on this months theme: 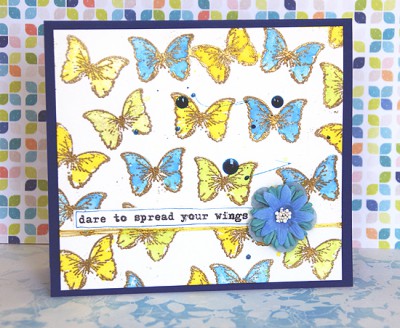 For this one I first used a butterfly stamp from a Finnabair stamp set „Don´t forget to fly“. First stamped with VersaMark ink, then applied golden embossing powder and heat set it. After that I took some spray inks (green, yellow, blue) and colored the butterflies with them very freely.

I then added a golden yarn around the card, stamped a sentiment on a strip of white carstock, layered 3 flowers from my stash on top of each other and then applied some „Mini Prills“ in the middle. For final touches I added some blue Glimmer Glaze splatters here and there and glued the background on a blue card base. 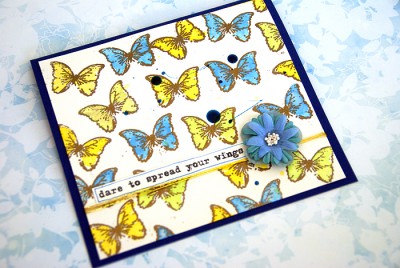 Now hop over to the MMCC blog for more card inspiration and submit your creation here. Have fun!!! Hope to see you there,

Happy April, everyone! How´s the weather at your end? We´ve had our share of rain, storms and hail mixed with beautiful sunshine days – typical April weather, so to say. And how´s your gardening getting along? We have started..but mainly kept with sowing some seeds and waiting them to grow. We like to work in our little garden with cherry and plum trees and a small vegetable garden. Here is a garden themed layout, I created with the new Watering Can collection while waiting for this years season to start: 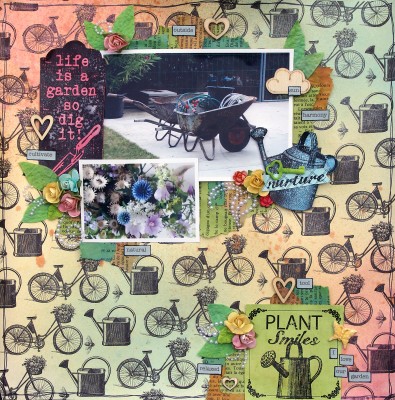 and here is a little step-by-step about how this page came together: 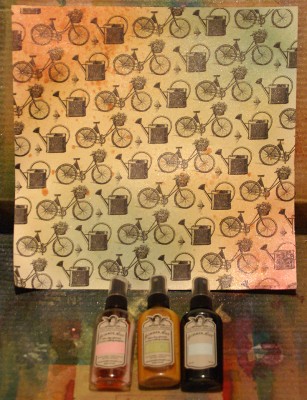 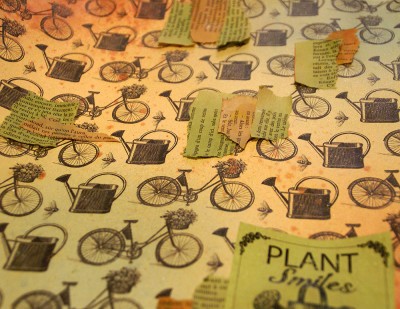 I first sprayed the lovely bicycle paper (Bikes and Baskets on Ivory) background with a light yellow, light blue and light pink Glimmer Mist. And then added some wripped and misted old book page pieces onto the background. 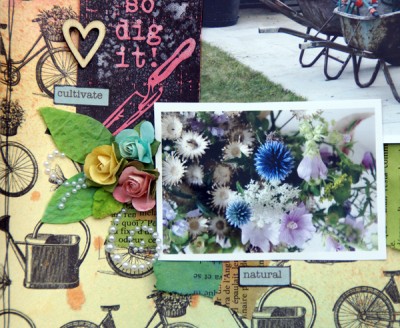 Next I started adding all kinds of little bits and pieces in clusters around the photos. Some paper roses, spray inked pieces of tissue paper, pearl swirls (now that sounds funny written like that :)..). The watering can and the journaling pieces are from the Garden Sayings on Ivory paper. The are also some wood veneer hearts here and there as well as some sticker words to add to the journaling of the page. 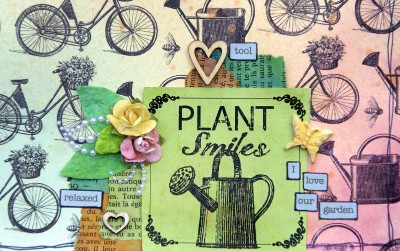 I´ve even added some clay elements here and there which I made myself with molds. These are also colored with Glimmer Mist to add to the color scheme of the page.

Thanks for coming over and taking a look! Always lovely to hear from you guys, so would love if you left me a comment <3 !