Hello lovelies! Time to post yet another SST card challenge. I was lucky to make it ot round 3!! Here are the requirements:

1. General:
Make a card with lots of doodling on it.
2. Theme: Free
3. Colour: Free
4. Size: Free
5. To be used:
– Minimal of 3 elements on the card on which you doodle,
– Doodle a quote directly on the card,
– All doodling must be hand doodled!

6. Not allowed:
– No premade embellishments,
– No images or stamps are allowed on this card, no cut out images (from patterned papers, prints, internet etc.)
– Flowers in any form. You can’t even doodle flowers on your card. You can doodle anything else.
– Alphabet stickers, alpha thickers, diecut or punched alpha, handcut alpha, stamped alpha, punched alpha, alphabet using a stencil or any other alphabet embellishment.

7. You can use:
– Cutting machines and punches, except for alphabets and flowers 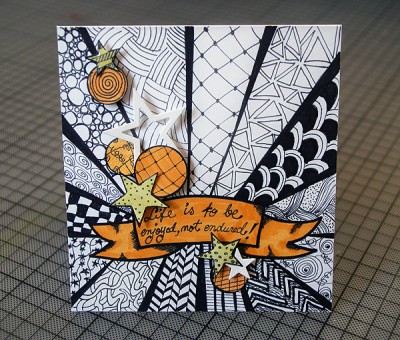 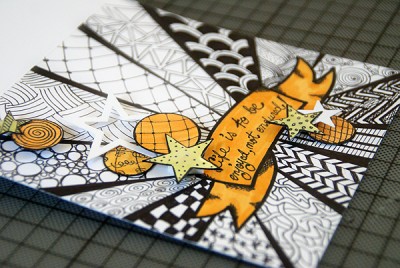 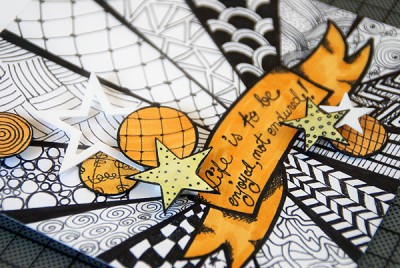 Here is what I did: I first doodled the banner by hand, then added some shadows by hand and finally wrote my quote directly onto the card and banner. Next I drew thick black sunrays and alled plenty of doodling in between. All hand drawn. After that I doodled some more in between the rays – every ray with a different pattern. Next I used a Memory Box star die cut die to cut the stars out of white cardstock. After that I punched some circles using a circle punch (again white cardstock). Then I went along and doodled some patterns on them and colored the card partly (banner) and the elements with Copic markers (again by hand). Some elements are glued down directly onto the card and others with 3D foam for more interest. On the yellow stars I applied some Glossy Accents in the end for additional detail. That is my take on this one. TFL!